The Crosstown Showdown turned out to be more of a Crosstown Stalemate as neither the Bryan nor A&M Consolidated girls soccer teams could break through during a scoreless draw in District 18-5A action Tuesday night at Tigerland Stadium.

The Lady Vikings (4-5-1, 1-0-1) had plenty of opportunities from the corners, but they couldn't cash in on three corner kicks in the first 10 minutes of the match nor during a barrage of four corners in the last 6 minutes.

"We pounced. We pressured," Bryan coach Chris Gibson said. "We worked on that yesterday of playing nice through balls, really splitting instead of trying to go through, and it showed with the pressure. We just had opportunities we missed. I'm proud of that. We just kept going, and we didn't hang our heads down. We kept looking for the next opportunity."

Meanwhile, the Lady Tigers (4-5-2, 0-1-1) overcame defensive miscues in the first half to turn up the pressure and push the ball early in the second but failed to find a way past Bryan goalkeeper Alleea King.

Bryan's early pressure didn't pay off, but it certainly generated more and more opportunities as it forced gaps in Consol's defense. Brianna Garcia and Lesly Deleon each got several breakaway opportunities in the first half though Lady Tigers' goalkeeper Alyssa Crites kept their on-target shots out of the net.

The Lady Vikings' first corner came with 33:30 to go in the half when Liz Harrison seemed to set up Ryka Shea with a solid header opportunity in front of the net. However Shea's header went high and a Consolidated player knocked it out to give Bryan another corner opportunity.

Harrison's next corner was corralled by Crites after first touching a Lady Tiger and Bryan didn't get another solid look at a shot off a third corner kick by Harrison with 29:48 remaining.

"We tried a bunch of new stuff today -- we had two new starting outside backs that kind of led to a lot of their chances," first-year Consol coach Joey Lockart said. "Once we reorganized it at halftime, it kind of eliminated some of their chances [and] we created chances. It's just a matter of getting a foot on the ball or a head on the ball in the right places and making things happen just a bit quicker."

Consol had big opportunity about five minutes later when a pass got past a Lady Vikings defender and Shelby Bruffet made a nearly open run at the net, but King saved the close shot.

Most of the Lady Tigers' best chances came in the first 15 minutes of the second half, including a header by Abbye Vessell off a Molly Thompson corner from the left side that was barely saved by King.

The corner was set up when a 15-yard shot by Thompson missed right but was barely tipped on the way out by the Bryan goalkeeper, who finished with seven saves.

"We switched formations a bit," Lockart said about creating opportunities in the second half. "We threw a few more numbers forward. We went from a one-striker system to a two, which takes a lot of the load off Jackie [Culpepper] and allowed her to have a partner. Throwing more numbers forward allowed us to keep pressure there and keep the ball on their half of the field."

Despite the Lady Vikings flurry of activity in the closing minutes, Consol needed just three saves from Crites.

The Lady Tigers' defense weathered the four corner kicks in the final six minutes without directly giving up a solid shooting look, though Bryan did come awfully close.

After the third corner kick had been cleared away with no shot, the Lady Vikings were back in business when Garcia slipped past a pair of Consol defenders and got a look at Crites from the right side. The shot aiming for the bottom left corner of the net just missed its mark and skirted out of bounds.

Number of visits to the site: 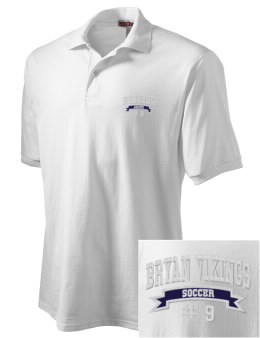